18Then Jesus came to them and said, “All authority in heaven and on earth has been given to me. 19Therefore go and make disciples of all nations, baptizing them in[a] the name of the Father and of the Son and of the Holy Spirit, 20and teaching them to obey everything I have commanded you. And surely I am with you always, to the very end of the age.” (NIV)

There’s a lady that’s a regular at one of the places that I go to in the mornings for brekky. We’d been nodding and smiling at each other for a month before I went and sat down with her and we started talking. Now we catch up most mornings. It’s really nice. Yesterday we discovered that we know a lot of the same people.

She grew up one street from my parent’s, and her husband lived in the same street. 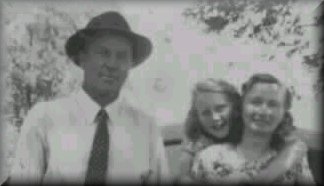 When she was 15, my grandparents gave her a lift to and from a wedding. It was really nice hearing her talk about two people that I really loved. She said she remembers that my grandfather always wore a hat and had a great sense of humour, and my Nan had a great laugh. I remember these things too, although I would’ve said that Nan had a bizarre laugh (maybe she was just being polite).

The wedding that they went to was that of my grandparent’s, best friend’s daughter. She said she’d lost contact with them along the way and I was able to fill her in on where they’re at – the dad, “Harry” died 2 weeks ago. We talked about a lot of the families that live in my parent’s street. Most of whom have moved on, but there are a few still there. We also talked about how she came out here from England when she was 10, and I heard her story, where she’s from and how they came to live in Dandenong. She’s still in contact with a family that used to live in my street, I remember playing with their son before they moved away. I was around 7 at the time. We talked for over an hour about our mutual friends, and while there’s 26 years between us, these memories helped us connect more closely as friends. I also really enjoyed remembering people and places from my past and connecting them with my present, and how much has changed in me over the years.

I think I mentioned in my previous post that I’ve been making my way through the New Testament once again, and just like yesterday’s conversation, it’s reminding me that I’m a part of a bigger story. A story that has been in progress for centuries, since the beginning of time (and beyond). It’s reminding me that Yahweh has been about the same business all this time. He’s been calling out to His children and inviting them into relationship with Himself. As I read through the Gospels and now Acts, it been wonderful to watch how Jesus corrected people’s assumptions about his Father and invited people into loving, and meaningful relationship. I also love how he called them, and then sent them, telling them to do the same things, and how he made it clear that that’s what His Kingdom is all about. Freely receiving and freely giving. Such beauty, such grace, such love!

I’m also seeing once again that this isn’t about ‘doing’ but about living. He didn’t come so that we would just obey him (although of course that’s a part of it), but he came so that we may have life, and be his friends. So that who we are as his friends is lived out in the midst of not only those who know Him, but those who don’t. That we be about the same stuff that he is, that we, for want of a better term, ‘buy into’ the same story. Not because we feel compelled to, but because it’s a natural response to the love and grace that he pours into our lives.

In this respect we can neither be ‘inward-looking’ (aware mostly of our Christian families) or ‘outward’, but rather constantly aware of those around us and looking for opportunities to bless whoever it is that comes our way, whether they be brother, sister, friend, stranger or even our enemy. The story, the thing that we’re a part of, that has been going on all these years, the thing that we commit ourselves to when we become disciples of Jesus, as it has been for centuries, is to pour out the blessings and love that have been poured into us, upon any and all that our Father places before us.

This is the context into which the Christian enters.

This is our story.

This is our heritage.

This is what it is to be a friend of God.

This is what it is to be “a co-operative friend of Jesus” (as Dallas Willard so eloquently puts it).

Back coffee-shopping in Dandy today. Long day. Busy day. Busy week. Great coffee, lovely people, and peaceful enough to sit and read and write. Not sure I could ask for a lot more on a Friday afternoon to top off the end of a very hectic week. Lovely.

Speaking of lovely, I’ve been making my through the Gospels again and watching (I’m a visual reader) the way Jesus interacted with the various groups of people, messing with their pre-conceived ideas of God. There were very few people who met him and said “Yup, you’re Him, and you’re exactly what I expected“… maybe a handful? But then, apart from maybe Simeon & Anna, even those who had an inkling of his true identity weren’t always certain. Even John the Baptiser sent his disciples to get confirmation when he found himself in prison.

Mostly of course this was because nobody really expected the Messiah to act and respond the way Jesus did. The religions leaders/teachers couldn’t bring themselves to accept as Messiah someone who was so critical of the job they were doing, and on top of that, he went and gave authority to ‘the man on the street’ to preach the Kingdom of God – to teach, to preach, to heal, he even gave them authority over demons and to forgive sins! Completely by-passing the accepted authorities. I mean, how dare he? Even while recognising the wonder of what he did, they were intensely jealous for their own status and significance within their society. I mean, let’s face it. These guys had been the keepers of truth and teachers of Israel for quite some time, how dare this young upstart, this carpenter’s son, challenge the status quo by going about teaching relationship with God, healing on the Sabbath and claiming to be God’s Son?!? Then, then… he gave others the authority to do the same!

The really sad part is that they recognised the good he was doing, the authority with which he spoke, and Caiphas had even prophesied in their midst concerning him! They were just really cheesed off that their own positions were being called into question. When it came down to it, they quite definitely had made it all about them. If only they had had “ears to hear”, they would have realised it really was all about them.

Then there was the common man, daily going about his business of eking out an existence for himself and his family – and along comes Jesus… the Son of God, the Creator himself… right into the midst of their lives, turning them upside down.

The story that ‘gets me’ every time is the one of Peter who had been out fishing all night and had nought to show for his efforts. Jesus suggests he throws the net over the other side of the boat and I get the feeling Pete only does it to humour him – “low and behold” he pulls in more fish than his nets can handle. Peter, confronted with the reality of this one event, reacts in a way that I totally understand… “Go away from me Lord, for I am a sinful man!” The self evaluation, the sense of unworthiness! And of course Jesus responds in his inimitable way… “Don’t be afraid“… then he invites Pete into relationship with himself! How lovely is that??

Then of course there are the women, the tax collectors, the unclean, the prostitutes, the demonised, the sick the paralysed the, rulers, the children, the gentiles, the rich, the poor, the military, the movers and shakers (to name but a few)… and each time Jesus meets them where they’re at, speaks truth, shows compassion and love and grace and mercy, and turns their respective worlds upside down.

I find myself wondering what my reaction would’ve been 2000 years ago. I suspect I’d react like Peter, feel completely unworthy of his attention, but truly longing to be near him, to hear him, to get to know him. I think I’d also find it difficult not to feel sorry for the religions leaders, after all, they were trying to be true to what they believed, and Jesus really did give them a serving… fair, of course, but harsh. I do love that he made it clear that God Himself had stepped down from Heaven to shepherd his own sheep (slightly reminiscent of Ezek 34). It’s just a shame these guys couldn’t let go or the responsibility they felt (and enjoyed), their status and their positions of honour and get with the relationship…